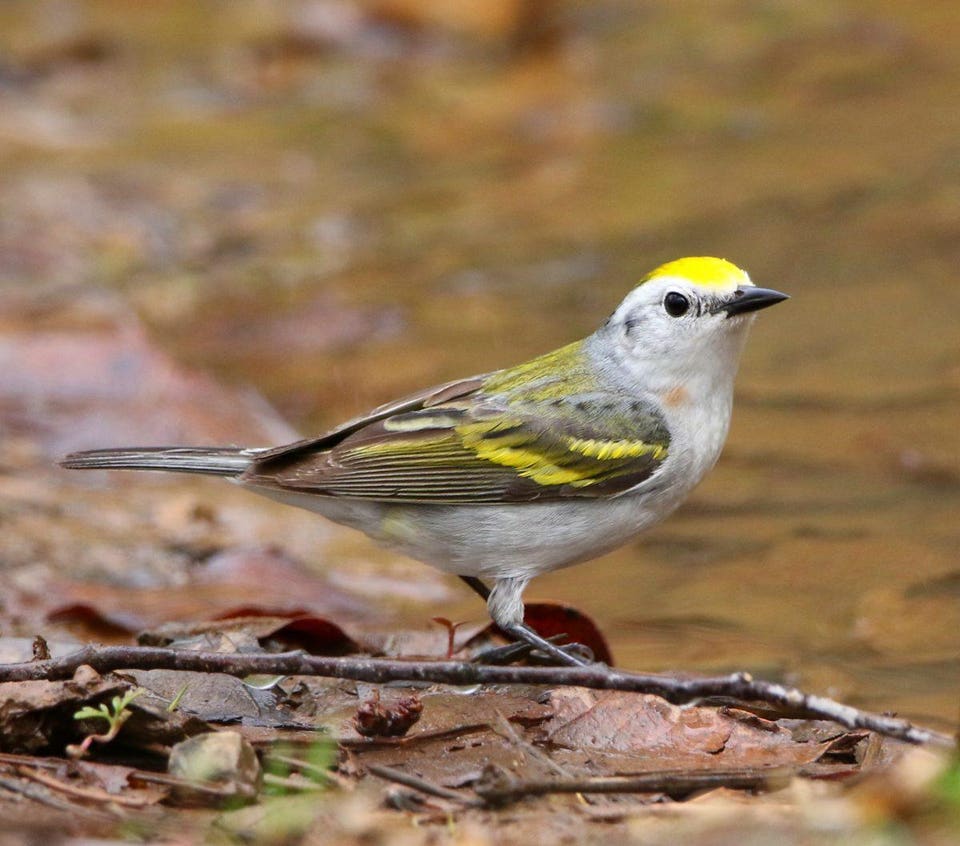 “It’s extremely rare,” explained ornithologist David Toews (pronounced “tays”), a postdoctoral associate at the Cornell Lab of Ornithology and lead author of a recent study into the possible origins of a spectacular never-before-seen avian hybrid.

The unique bird was first spotted and photographed by birder and citizen scientist, Lowell Burket, who lives and works in Pittsburgh, Pennsylvania.

“During the migration periods and sporadically throughout the summer, I make a 2-hour drive to my family’s farm property, which includes a couple hundred acres of woods,” Mr Burket explained in email. “I have had a life-long interest in wildlife photography but I never did anything about it until the mid-2000s because I didn’t really have time. About 9–10 years ago, I noticed some colorful birds flying out of a small watering hole on one of the horse trails. I noticed them again later that summer at the same watering hole and decided to see if I could get pix of these colorful birds.”

“My pix were lousy as the birds were so tiny,” Mr Burket noted ruefully. “[S]o I did some research about the best ways to get decent pix of birds in the wild and purchased an entry level professional camera and zoom lens.”

As you can see, the quality of his bird photographs improved dramatically. 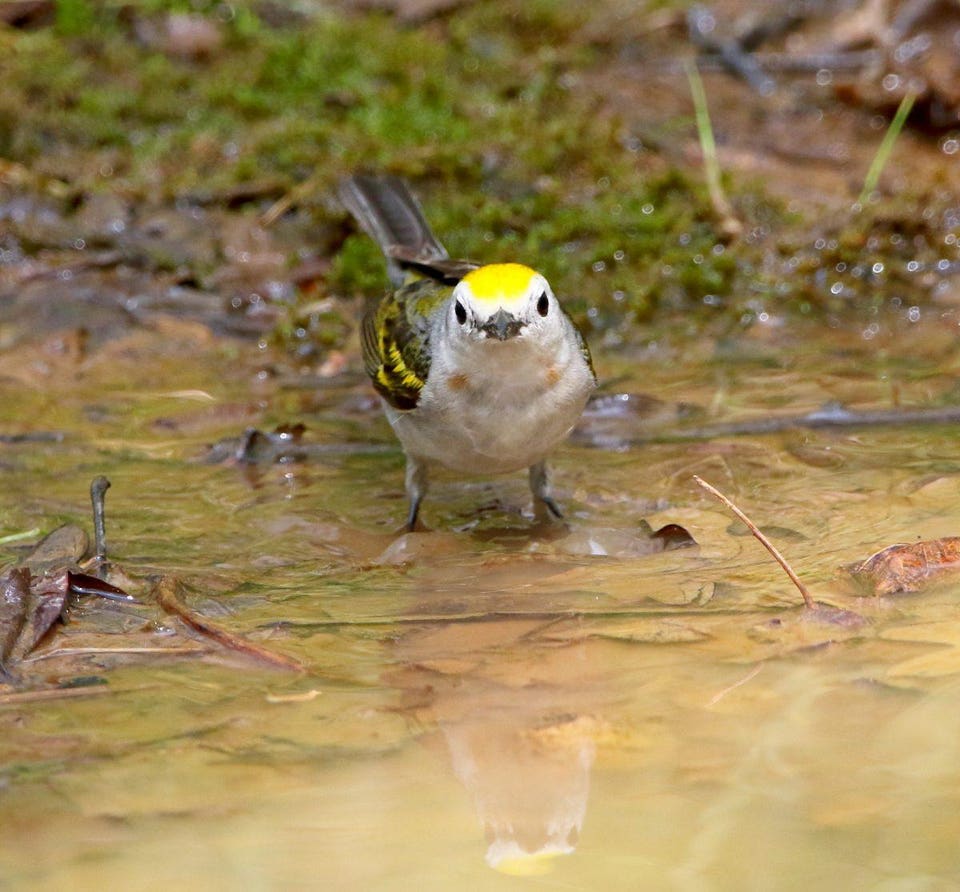 Male Burket’s warbler shows off two symmetrically-placed, albeit faint, rufous spots on either side of his neck.
(Credit: Lowell Burket.)LOWELL BURKET

“On May 7 of this year, I took pix and videos all afternoon at the birdhole and the hybrid appeared twice for about 20 seconds. I thought it was a Brewster’s warbler and it stood out to me because I had never seen a Brewster’s before in spring migration.”

Brewster’s warbler got its name in 1874 after it was described by William Brewster, who discovered it in Massachusetts. Initially thought to be a new species, the bird was given the scientific name Vermivora leucobronchialis, but Brewster’s warbler is now known to be a hybrid between blue-winged and golden-winged warblers; Vermivora cyanoptera X Vermivora chrysoptera. Brewster’s warblers typically feature genetically dominant plumage characters and patterns — for example, the black line through its eye and the distinctively separated wingbars come from the blue-winged warbler, whereas the creamy yellow underparts and yellow wing bars come from the golden-winged warbler.

“When I studied my pictures later that evening, I noticed it was lacking the black eyestripe and the yellow breast coloration that is typical of Brewster’s,” Mr Burket continued. Further, he noted that this mystery bird had a faint, but distinctly peculiar reddish-brown spot on each side of its neck. Was it dirt? Dried blood? Or was it the bird’s own feather coloration? 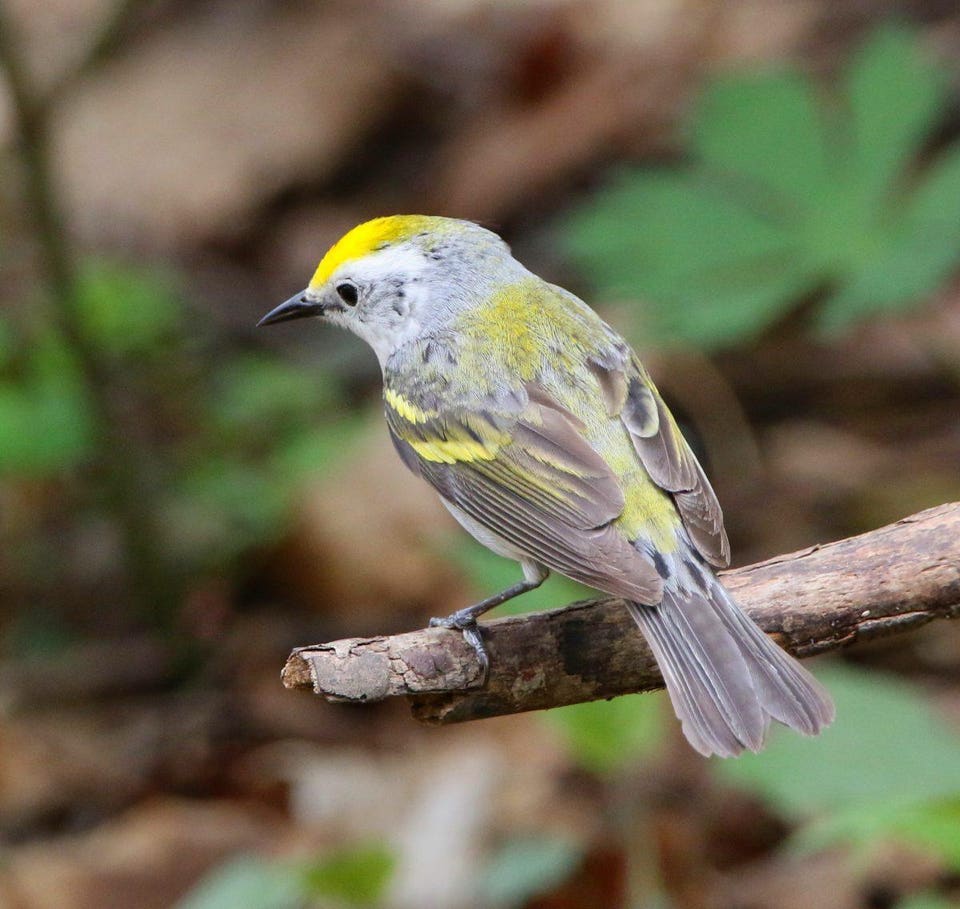 “I then examined the bird from the rearview picture and I could see the white supercilium [‘eyebrow’] and a faint gray mask, typical of the golden-wing [warbler], so I decided it has to be Brewster’s,” Mr Burket continued. “[B]ut where did the rufous spots come from?”

The only warbler species in the area with rufous-colored neck markings are chestnut-sided warblers. 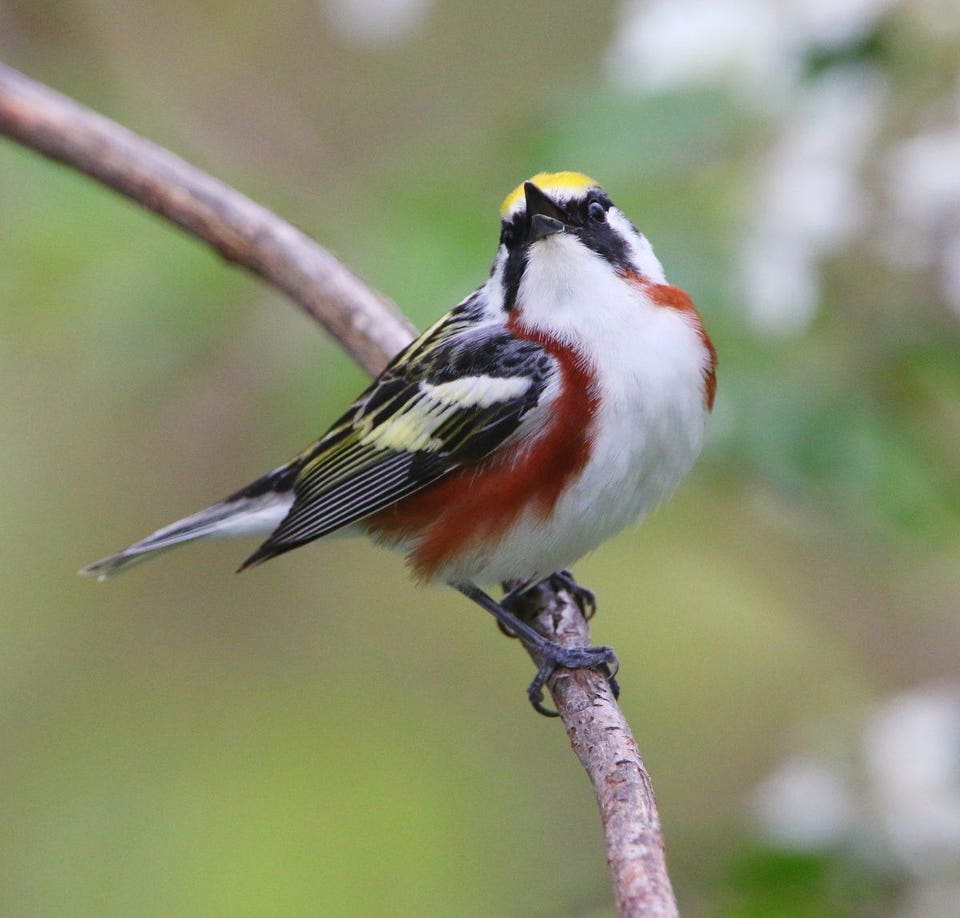 “I decided that I needed to see it singing to see what song it sang.”

Song is one of several “diagnostic cues” that other songbirds - and birders! - rely upon to identify species. Each species sings its own distinctive song, which is how a female finds a mate of the correct species. Nestlings of both sexes learn their species’s songs by listening to their fathers and to nearby males of the same species whilst still in the nest. Thus, this mystery bird’s song would be diagnostic for which species was its father. 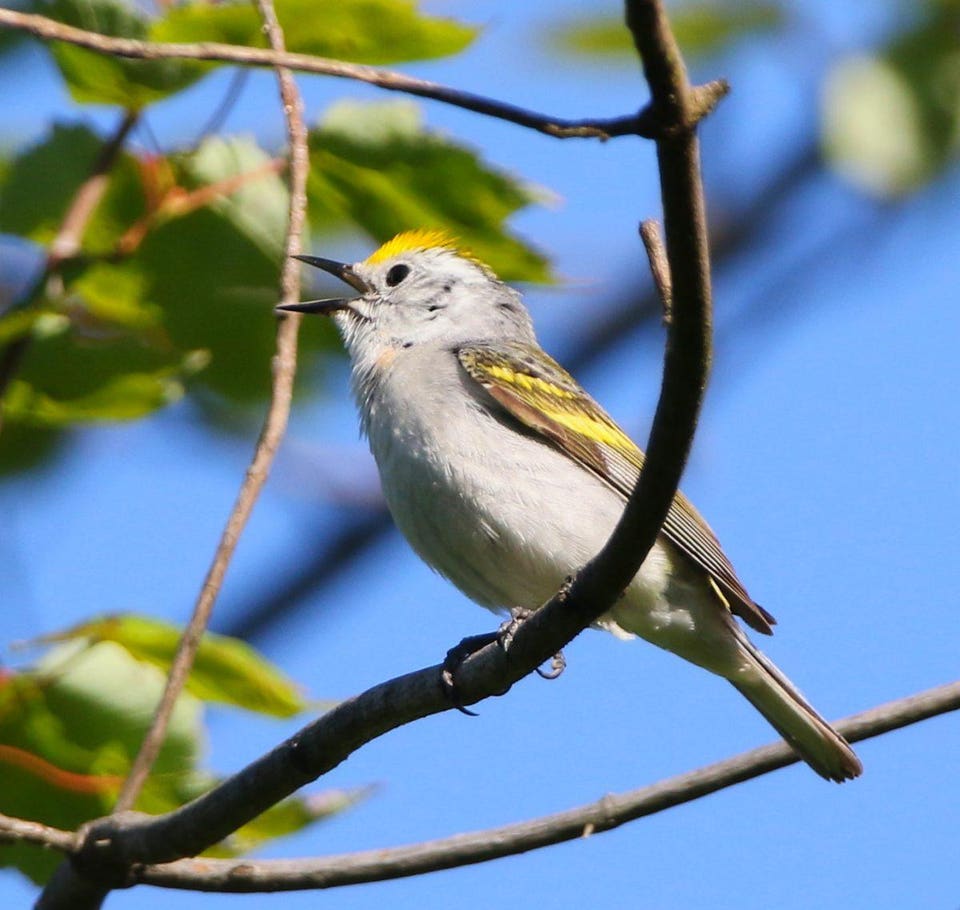 A few weeks later, Mr Burket got his wish: he videoed the mystery bird singing on two consecutive days. The audio was high enough quality that he could identify the species song. He discovered that the mystery bird was indeed, singing a chestnut-sided warbler song.

“I googled ‘hybrid warbler’ and couldn’t find anything on this combination and decided to contact the Cornell Lab of Ornithology to get an expert’s opinion,” Mr. Burket elaborated. He emailed some photographs and video of the mystery bird to the “Lab of O” and eagerly awaited a response.

“I tried to make the email sound somewhat intellectual so they wouldn’t think I was a crackpot,” Mr. Burket recalled. “Having the photos and video helped.”

Intrigued by what he saw, Dr. Toews drove 4 hours from Cornell to meet Mr. Burket one week later and the next morning, they set up a mist net in the same area where the mystery bird had been singing repeatedly. Thanks to Mr. Burket’s intimate knowledge of this bird’s habits, it only took 4 minutes to catch it. 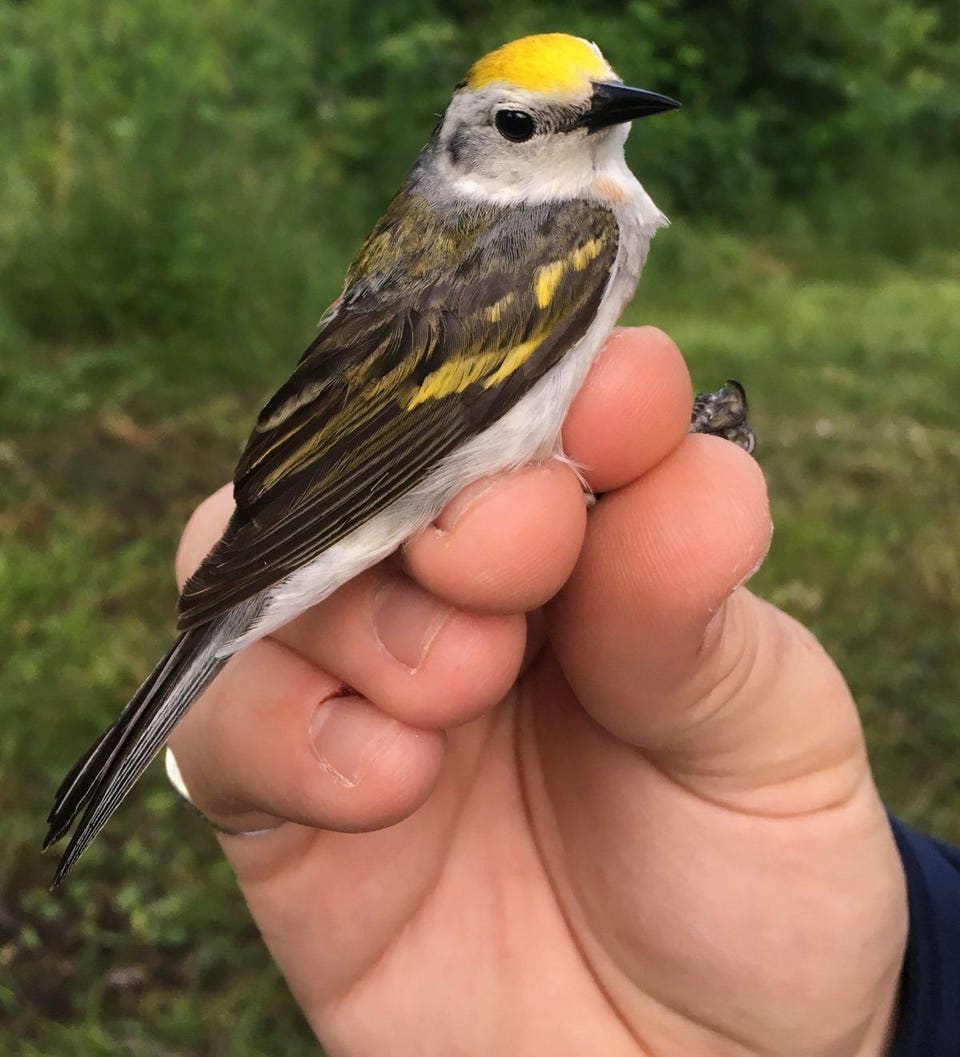 Male Burket’s warbler, a never-before-recorded triple-hybrid bird, was captured and banded on 28 June 2018, by David Toews and Lowell Burket.
(Credit: Lowell Burket. Note: This image has been cropped from the original.)LOWELL BURKET

“[I]t was an amazing experience,” Mr Burket said. “I had only ever seen something like this on the Discovery Channel.”

Now that Dr. Toews had this mystery bird in-hand, he noted that it looked most like a juvenile chestnut-sided warbler – unlikely in early May when it was first spotted since most warblers don’t fledge until June. But at the same time, the bird’s white supercilium – which is black in adult male chestnut-sided warblers, and olive or grey in juveniles or females – and its faint grey cheek patch, were both more characteristic of Vermivora warblers. Dr. Toews took a variety of detailed photographs, and measurements of the length of the mystery bird’s bill and wings along with other physical characters for closer examination, and gave it a USFWS leg band bearing the unique number: 2850–44901. Before releasing the bird, Dr. Toews also took a tiny blood sample for genetic analyses. He then returned to his lab and methodically worked his way through all this information like an ornithological Sherlock Holmes.

Figure 2. (a) Culmen and wing length for Vermivora warblers (yellow, golden-winged; blue, blue-winged; grey, Brewster’s) and chestnut-sided warblers (red). The hybrid is shown with an asterisk. (b) The genetic index across six loci that distinguish Vermivora warblers. From the hybrid, we estimated the genetic index of its maternal parent, falling within the range of hybrids between golden-winged and blue-winged warblers (i.e. “Brewster’s warblers”).
(doi:10.1098/rsbl.2018.0557)DOI:10.1098/RSBL.2018.0557

The genetic evidence was equally interesting: the mystery bird’s mitochondrial DNA (mtDNA) was 99% identical to golden-winged warblers, and 97% identical to blue-winged warblers — these species differ by only 3–4% (Figure 2b) — so this finding was as expected. However, VermivoramtDNA differs from chestnut-sided warbler (and other Setophaga warbler species) sequences by more than 8% (ref), which once again, highlighted the probable identity of the mystery bird’s father.

To further nail down the identify of the mystery bird’s putative father, Dr. Toews then examined single nucleotide polymorphisms (SNPs) that differ unambiguously from Vermivora warblers (n = 89 sites) and found that the mystery bird was heterozygous at all sites except one — which, in retrospect, is probably variable in chestnut-sided warblers, too. 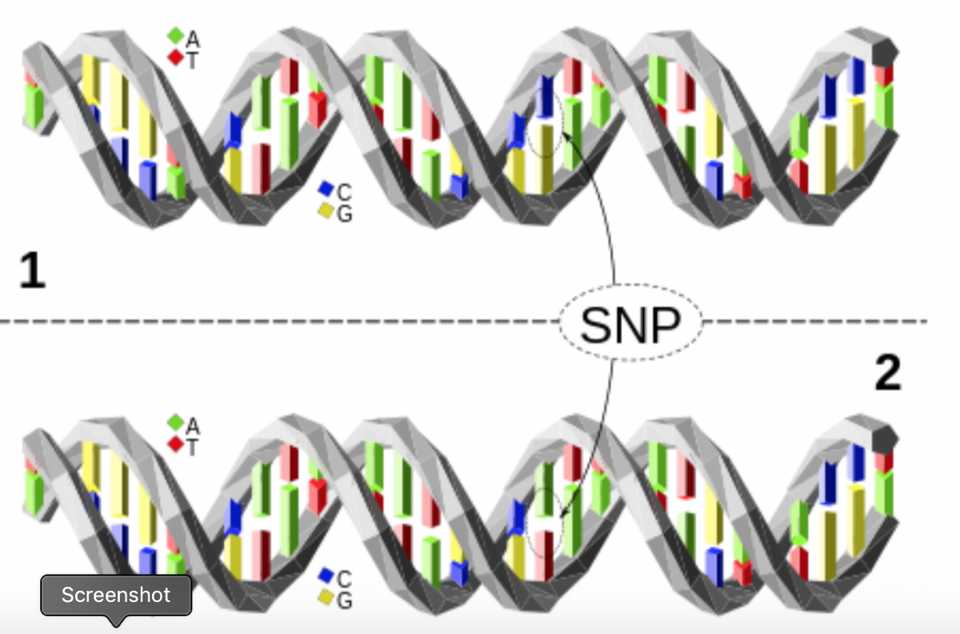 SNPs (“snips”) are a very common form of genetic variation seen in all living things, representing a change in just one nucleotide, or DNA building block, within the genome. Thus, finding that half of these SNPs matched those of the chestnut-sided warbler pointed towards the identity of the mystery bird’s father.

“The female is a Golden-winged/Blue-winged Warbler hybrid — also called a Brewster’s Warbler. She then mated with a Chestnut-sided Warbler and successfully reproduced,” Dr. Toews concluded. 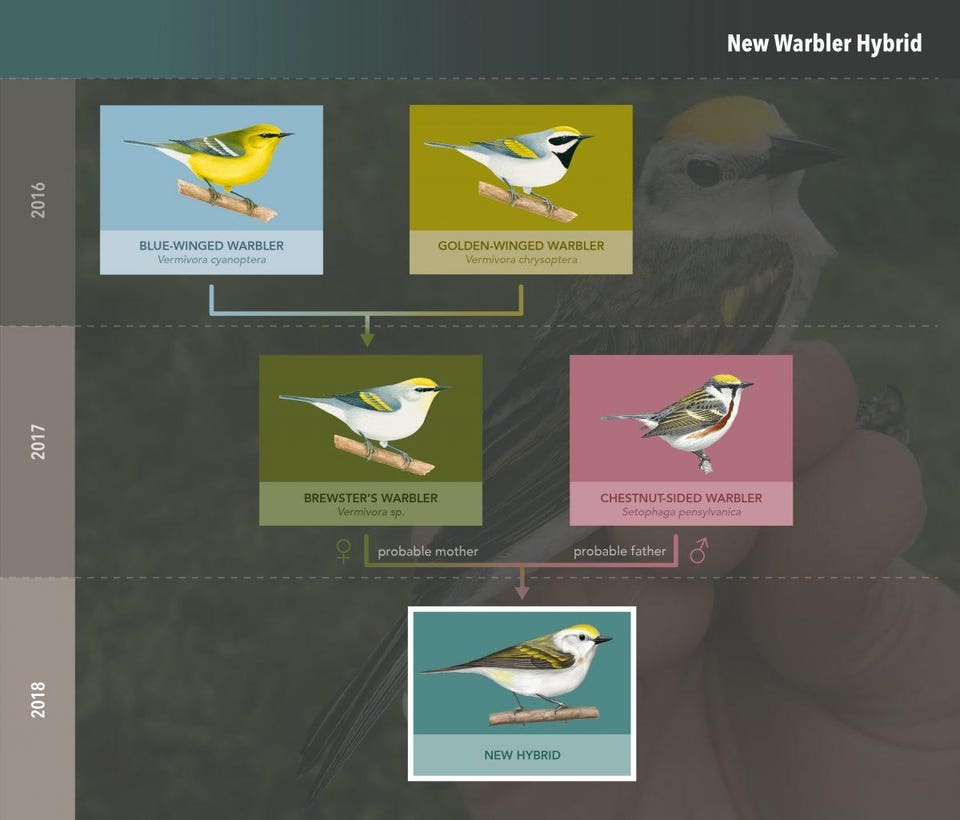 But why would these songbirds hybridize at all? Especially since the females select their mates primarily based on the quality of their songs?

“It could have just been a mistake (these things happen),” Dr. Toews replied in email, “although it could be that the number of suitable mates is so low (Vermivora warblers are declining throughout the Appalachians) [that] she was making the ‘best of a bad situation’.”

“Choosing to mate with a male that isn’t perfect might be better than no mate at all!” Dr. Toews observed. He then pointed out that hybridization amongst Brewster’s warblers and chestnut-sided warblers has never been recorded before.

“In fact, this type of three-species hybridization is ‘extremely rare’ among any animals,” Dr. Toews said.

What does this hybrid warbler — now formally known as Burket’s warbler — reveal about species barriers, especially in songbirds?

“One-off hybrids primarily tell us that species barriers aren’t perfect, but that isn’t totally surprising,” Dr. Toews explained in email. “In this instance, it also tells us a bit about reproductive compatibility between taxa that are quite divergent. While this hybrid might never actually reproduce, it does suggest that there are not tons of genetic incompatibilities between the parental taxa, so that it was able to develop to at least appear ‘normal’.”

“This kind of fits with the conventional wisdom in these warblers too — that species barriers are maintained by ‘pre-mating isolating barriers’ [such as song] and not as much by post-mating genetic incompatibilities,” Dr. Toews added. 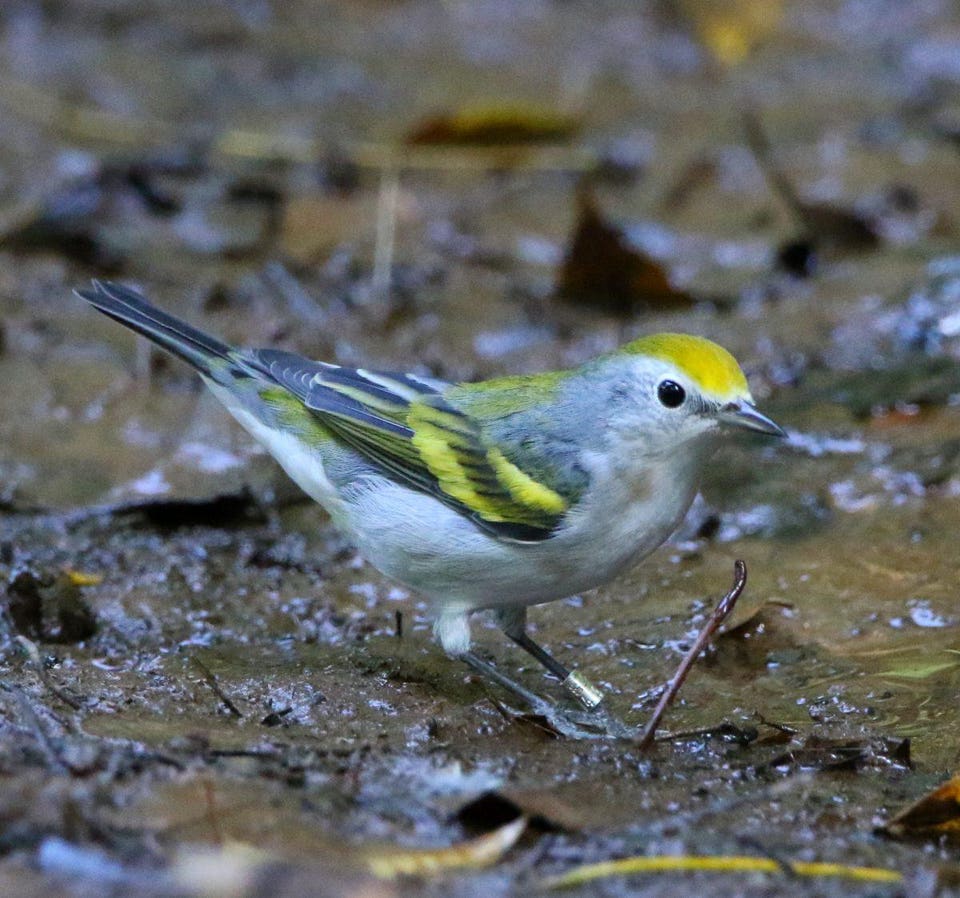 What was the most enjoyable aspect of all this detective work?

“The fun part about this for me was being able to involve a citizen scientist like Lowell,” Dr. Toews said. “Also, using the genetic markers to predict the maternal plumage patterns, which made this a more novel contribution in terms of determining who the parents were.”

Might this Burket’s warbler successfully father his own ‘children’ or will his mixed ancestry make him an undesirable mate? Dr. Toews released the bird, and is planning on keeping an eye on the birdhole on Mr. Burket’s family property to see what the future holds.

What does Mr. Burket think about all this excitement?

“I had literally zero knowledge about birds until seven years ago,” he replied. “And now I end up discovering what appears to be a first-of-its-kind bird. It can happen to anybody!”